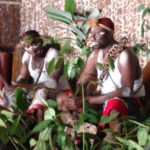 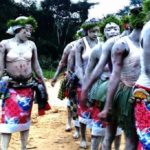 It is a traditional cultural path and spiritual discipline that has been practiced by many tribes indigenous to equatorial Central West Africa for thousands of years. Each tribe having distinct practices. Yet, having one common thread among all them, the sacred plant, Iboga. For we Bwiti it is a sacrament, medicine and teacher. Bwiti can basically be translated as “School of Life.”  And those who are Bwiti are students of life.

Some sources mistakenly call Bwiti a religion.  Bwiti is in fact not a religion. Unlike religion, Bwiti does not involve faith or, a common collective belief system. Bwiti can be considered a monotheistic ancestral traditional path that is open to anyone who approaches it with respect and humility whether they be black, white, yellow or red. Bwiti consider all mankind as one.

The temple structures have three walls so that they may always remain open to the world. People may come and go as they please. During ceremony the temples are brought to life. Adorned with plants, torches, music, song and dance the temples become deeply reverent. At other times they act as safe havens for conversation, counsel, healing rituals, resolve disputes, relay teachings and social gatherings.

The Bwiti tradition is widely accepted across all of Gabon. Tribal values and practices are performed throughout the entire region from farmers, villagers, Indigenous communities to doctors, lawyers, police, army officers and by many sectors of the Governing elite.

Clandestine for centuries because of deep opposition from colonial missionary campaigns Bwiti has survived among a number of tribes completely intact and unadulterated by external influences. It continues to flourish and is expanding throughout the world in spite of tremendous persecution over the years. It is a testament of their resilience, strength of character and commitment to these traditional ways.

MISSOKO
A tribe Indigenous to Gabon that spans back over a thousand years and follows the Dissumba Bwiti tradition, the mother of all Bwiti.

“anything Spiritual must be shared from breath to breath.”